As an aside, let me first say that my list of blog posts to read seems to be growing by the minute. I am trying to catch up without deleting posts…I am a loyal reader, if nothing else, here in the blogosphere! But I feel this also needs to be completed…for all MY faithful readers! 😉 So I am writing Part 2 of the Canadian Railway Trip today.

Today, I think I will talk about scenery. Note two things…we went in March/early April and spring had not really “sprung” yet. Also, taking photos from the inside of a moving train can be less than fruitful. Lawrence, a Britt that we came to really enjoy, always had his camera around his neck and was also at list a bit annoyed by this fact. He has traveled the world on trains, though, so I think he knew what he was in for!

Going through the files, let me see what images I can find…we started off from Vancouver at night, so not much to show until the next day.

The first daylight leg of the trip goes through the Northern Rockies. This time of the year, we still see lots of snow and ice, but the views can be stunning.

They try to announce when photo opps are coming up. This is the best shot I was able to get of Pyramid Falls, with droplets on the window and the bright sunlight blowing out the highlights.

There are a few places where you can actually get off the train…very welcome, even in the frigid weather. A short walk around Jasper on this chilly day…

Wildlife abounds along the way, and again, they try to let you know if something is coming up.

At one point, we were just sitting on the tracks (which is not uncommon, more on that later). Only to learn that we were waiting for a herd of long-horn sheep to cross. Above are the shots I was able to grab of them as the train passed by. I think some of these guys are telling us, by their pose, what they think of the train being on their turf!!!!

Moose seem to be what everyone wants to see in Canada. We were fortunate to get a bit of a distant glimpse of a mother (called a cow) and her not-so-little one (called a calf). Given their size, they actually have a rather stately gait.

No, Dorothy, we are not in Kansas…though it looks like we could be! The plains… 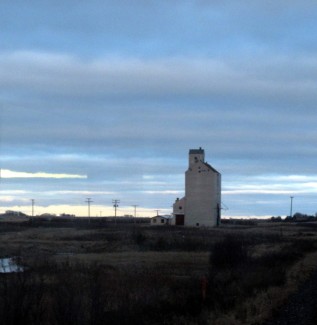 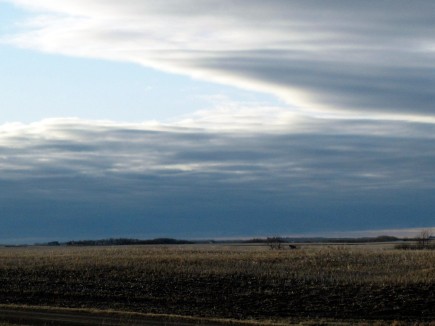 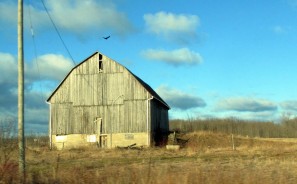 My favorite day for pictures was this beautiful morning…it may seem that the images are boring when you expect the majesty of mountains and Canada, but I was enthralled with the colors, textures, reflections, and lines…

You get to stop often (as mentioned above), as the freight trains have priority on the rails. They pass by very close to you!

I like that these empty cars were the same, but different colors…and always enjoy graffiti. (Is that wrong?) And yes, that black line on the side of the pictures is the edge of my window…close!

To wrap up this mostly visual review of scenery, here is a must-get shot from the last car… 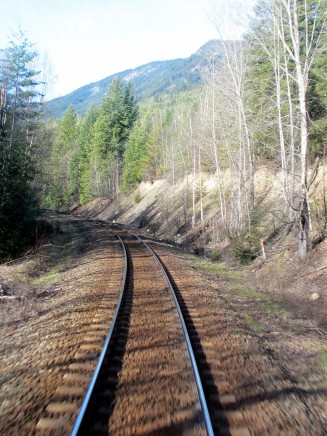 Until Part 3…thanks for looking!